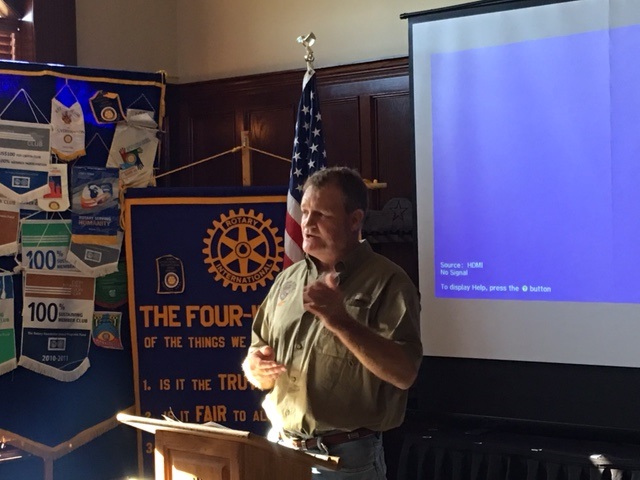 While many Rotary Club members see recent donations to a school in Zimbabwe as a noble thing to do, the support is actually helping foster better relations between factions that have been at odds in the country for nearly fifteen years. That was the message given by world famous hunter and safari guide Barry Style during his address to the Andover Rotary Club on Thursday.

Style is a third generation land owner in the country, and was accompanied to the meeting by his nephew Warrick. The family operates the Buffalo Range Safari, and Style also serves as the director of the Chiredzi River African Wildlife Trust, which has helped the area in numerous ways. One of the projects that they have undertaken is a school, which did not have running water until recent upgrades were made with financial help from the Andover Rotary Club. Style says that the school has drastically changed the lives of not only the students that attend, but the community as a whole.

"When I grew up as a child, I represented somewhat of a privileged upbringing." Style told the club on Thursday. "It was ten miles from my home to school. While I was riding there in a vehicle, I would see my African brethren also headed to school, but many of them were walking with nothing to cover their heads or feet. From that point on, I really wanted to make a change."

The long walks on the part of the villagers were not just for education. Much of their survival depended on being able to safely transport water back to their homes, which for centuries has been a painstaking process. When you compare that to America, where water runs free from a faucet for most of the population, the differences are a harsh contrast.

"Many times you have these people drawing a little bit of water from a river that is usually infested with crocodiles. Then, they would transport it several miles back to their home carrying it on their head or otherwise." Style said. "Safety has been an issue, and there have been many accidents."

While the CRAWT organization has tried to make a world of difference in the area, there is still a long way to go in the schools that have benefited from their help.

"These students are still sitting on the floor when they attend class." Style reported. "We are trying to get school desks in as we can."

Style says that under the current regime in Zimbabwe, that many families such as his were victims of a major land reorganization fifteen years ago. However, efforts on the part of the CRAWT organization have actually helped smooth what were some very tense relations between factions on both sides of the issue.

"This has actually helped us open a dialogue with the highest ranking official in our area." Style said. "We are now meeting on a regular basis to talk about the impact, and where things are going from here."

The efforts on behalf of the Andover Rotary Club have been spearheaded by Dr. Ron and Lori Kutter, who have traveled there on a number of occasions to help. They will host a fundraiser this Saturday night to benefit the CRAWT organization.

For more information on how you can help, you can speak to Ron or Lori by calling Kutter Veterinary Clinic at (316) 733-4222.

In affiliation with Rotary International, Rotary Club of Andover (RCA) is a group of passionate business and professional members who coordinate our collective experience, career skills and enthusiasm to improve our community through meaningful service projects. It sounds all too familiar, but having fun while doing those things is the ARC differentiator. After all, nobody said making a difference couldn’t be fun. We meet on the first three Thursdays of the month (and the fifth Thursday when there is one) at noon at Terradyne Country Club in Andover. We share a delicious buffet lunch together while having an informative program, usually with a guest speaker from the community.