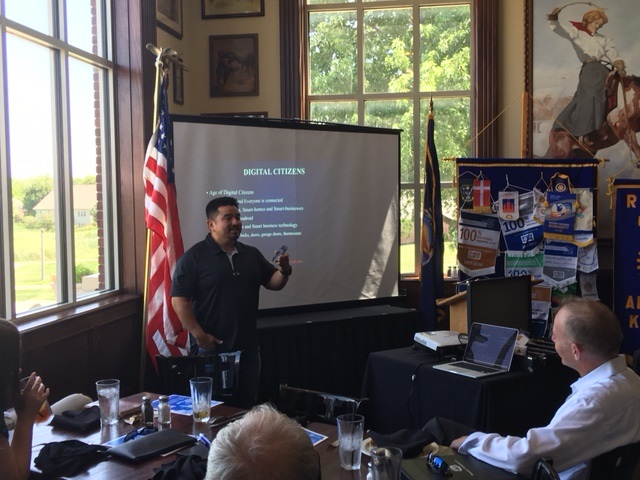 By Anonymous (not verified) News 0 Comments

ANDOVER - Keeping yourself save in both your personal and business activities online was the focus of Thursday's weekly meeting of the Andover Rotary Club. Sam Alva, owner of 3Delta Security talked about not only his current business, but his years of security work during his time in the United States Military.

"My job over the years has been to identify and expose flaws in security systems all over the world." Alva told members at Terradyne Country Club. "It has all been done legally, but in my career, I've bypassed security systems at places you wouldn't believe, from military bases to banks."

"Many people think that hackers can just go out and find a way to bust into a computer or a security system." Alva explained. "In just about every case, the person on the other end has done something that has given the hacker the ability to get in."

Those actions could be many things, from opening an e-mail and clicking on a link that gave the hacker access, to even more complex cases that had disastrous implications.

"In the Middle East, one of the biggest power plants over there was infiltrated by someone's curiosity." Alva recalled. "The story goes that a flash drive was left out in the desert outside of the plant, and labeled it in a way that would pique their curiosity. Sure enough, they took it into an office and plugged it in. That gave the other side access to the plant's entire infrastructure."

Back home, Alva says that the average computer users can do plenty to protect themselves, including beefing up their passwords.

"My recommendation is to have a password that is at least thirteen characters or more." Alva warned. "There are super-computers out there that comb cyberspace trying to hack in with various password combinations. They will usually not mess with a computer protected by a password with that many characters."

3Delta Security can be found online by visiting http://3deltasecurity.com/

In affiliation with Rotary International, Rotary Club of Andover (RCA) is a group of passionate business and professional members who coordinate our collective experience, career skills and enthusiasm to improve our community through meaningful service projects. It sounds all too familiar, but having fun while doing those things is the ARC differentiator. After all, nobody said making a difference couldn’t be fun. We meet on the first three Thursdays of the month (and the fifth Thursday when there is one) at noon at Terradyne Country Club in Andover. We share a delicious buffet lunch together while having an informative program, usually with a guest speaker from the community.